Home Sales Falling ‘In Most Large Cities West Of Ottawa’

Original article can be found HERE

With a new foreign speculator's tax in place in southern Ontario and tighter new mortgage rules nationwide, many of the country's housing markets are showing signs of cooling off.

"Based on a survey of real estate boards that we conducted earlier this month, home sales declined on a [year-on-year] basis in July in most large Canadian cities west of Ottawa," National Bank economist Marc Pinsonneault wrote in a client note Monday.

"If that trend persists, home price growth might decelerate in these regions."

Sales were down 40.4 per cent in July in Greater Toronto, following the introduction of a slate of new housing rules by the provincial government, including expanded rent controls and a new 15-per-cent foreign speculator's tax.

In Greater Vancouver, sales slid 8.2 per cent lower this July compared to the same month a year ago.

Still, the latest edition of the Teranet house price index, which is put out in conjunction with National Bank, shows strong year-on-year price growth: The index was up 14.2 per cent in July from the same month a year earlier, the same pace as the previous month.

But Pinsonneault admits his bank's index may lag the data coming out of the country's real estate boards, and the price growth seen on it today may be reflecting what happened several months ago.

"When you have a sudden shift in price trends, it's plausible that the Teranet-National Bank index will be lagged with the MLS [data]."

That shift in price trends seems to have taken place in Greater Toronto, where Toronto Real Estate Board data shows the average resale house price has already fallen 19 per cent from its peak. It was $746,218 in July, down from $920,791 in April.

But the latest Teranet house price index shows prices in Toronto were up 28 per cent in July from a year ago — though, again, that number may be lagging the reality in the city's market. 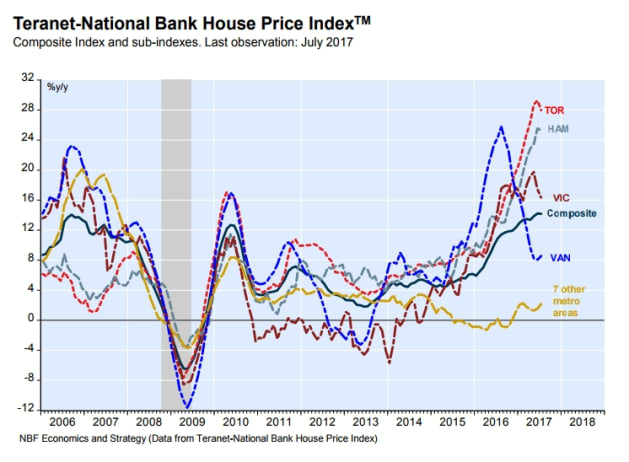 In Greater Vancouver, the benchmark price of $1.02 million is 8.7 per cent higher than a year ago, a solid increase though much slower than the double-digit increases seen until last year. That's in line with Teranet's house price numbers, showing an 8.6 per cent increase over the past year.

Pinsonneault singled out two housing markets that are bucking the trend and doing better these days: Ottawa and Montreal. He called them "two areas where the Teranet-National Bank Home Price Index was at a record level in July."

House price growth accelerated to around 4 per cent in Ottawa and 5.5 per cent in Montreal on a year-over-year basis.

Pinsonneault predicted "pressure on home price growth" from new regulations that require borrowers of insured mortgages to undergo a "stress test" to ensure they can afford higher rates, and from Ontario's new housing rules.