Many places in and around Toronto and Vancouver have crisis-level vacancy rates.

High levels of immigration, strong job growth and an aging population are among the reasons why it's becoming increasingly difficult to find an apartment for rent in Canada, a new report says.

The situation is particularly dire in and around Toronto and Vancouver, where many cities have crisis-level vacancy rates below 1 per cent. 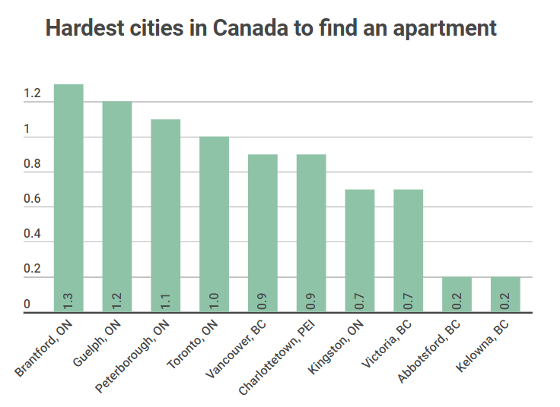 Toronto's vacancy rate fell to 1 per cent in October of this year, from 1.3 per cent the same month a year before. That's the lowest rate the city has seen in 16 years.

"Rising costs of homeownership forced more people to seek and remain in rental accommodation," CMHC said in its report.

"House prices in the Greater Toronto Area reached unprecedented levels during the early part of 2017, making homeownership out of reach for the majority of potential first-time buyers."